Like most professions, bartending has its own language to describe specialized tools and processes.

Your average citizen is familiar with some bar terminology, like cocktail, mixer, on the rocks, and virgin. Other jargon, you might know but not understand – what exactly does neat or straight-up mean? Then there are words you may have never heard before.

Let's break down 19 basic terms you should know before you throw a bar towel over your shoulder. Keep an eye out for bonus terminology in bold!

Enroll in training now to learn how to responsibly sell alcohol off-premises.

Sign up today to get trained on how to safely serve alcohol on-premises.

Terminology for Ingredient and Tools of the Trade

Here are a few terms to describe what you'll reach for as you mix drinks.

A bar spoon is a bartending tool with a small spoon on one end. Bar spoons have an extra-long shaft to reach the bottom of tall glasses, and often it's spiraled to help in layering cocktails (see below).

Some bar spoons have a decorative flourish at the other end, but they can also be topped with another helpful tool, like a fork or a flat disk (called a muddler for crushing up ingredients).

Bar spoons can be useful when you're building a drink (see below) – especially for measuring, layering, stirring, and muddling (explanations to follow!).

Bitters are an additive that balance out the flavor of a cocktail, making it more complex.

They're typically made of three elements:

If you really want to remove the magic, you could say that bitters are, essentially, alcohol infused with some kind of plant matter (but "botanicals" will probably sound more impressive).

A garnish is added to a drink as the final touch for presentation. Sometimes a garnish enhances the flavor of the drink, but sometimes it's purely for looks. Examples include cherries, olives, sprigs of rosemary, and lemon, lime, or orange wedges.

A jigger is an hour-glass shaped measuring tool for shots, typically made of steel.

Jiggers come in many sizes, but a standard jigger has one side that measures a standard 1.5 oz shot, while the other side measures a pony shot (1 oz).

"Sour" isn't an ingredient, per se, but it is how people will ask for sour bar mix to be added to their liquor (as in, "I'll have a whiskey sour"). The mix itself isn't entirely sour – it's made with sugar or simple syrup to temper the lemon/lime and balance the flavor.

The speed rail, or speed rack, holds the most commonly ordered liquor and ingredients (typically, the cheap generic or well versions).

Usually the speed rail is a stainless steel shelf connected to the sink and ice well at a station. 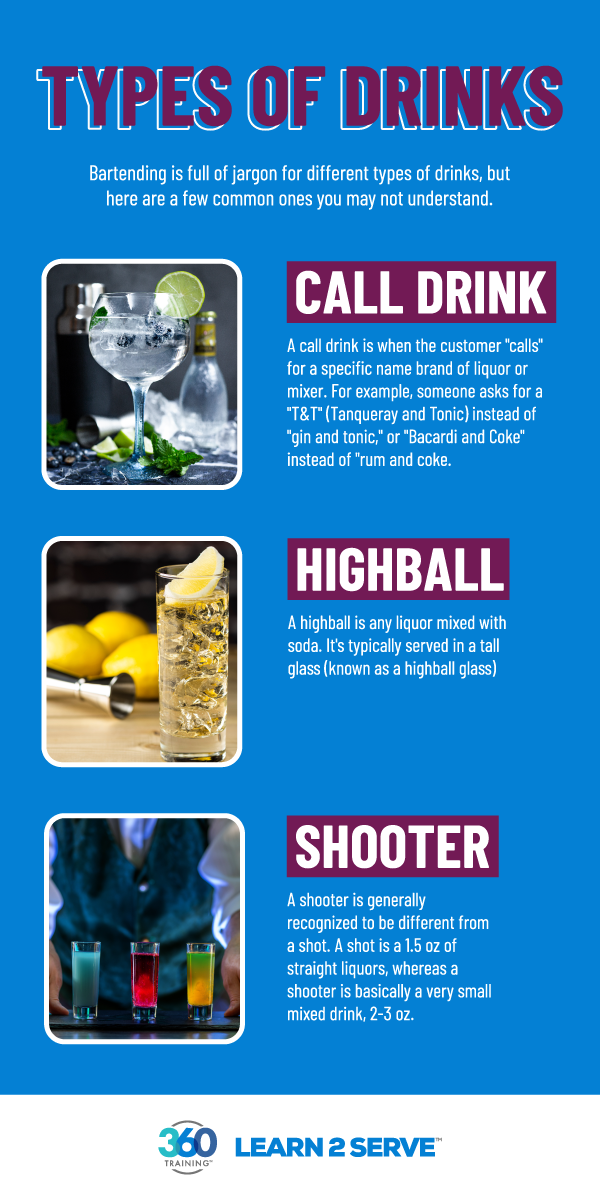 Bartending is full of jargon for different types of drinks, but here are a few common ones you may not understand.

A call drink is when the customer "calls" for a specific name brand of liquor (and sometimes a specific brand of mixer).

For example, someone asks for a "T&T" (Tanqueray and Tonic) instead of "gin and tonic," or "Bacardi and Coke" instead of "rum and coke."

If the customer names the type of liquor instead, you use the lower-cost liquor from the speed rail (see above). This is called a well drink or sometimes a house pour.

A highball is any liquor mixed with soda. It's typically served in a tall glass (known as a highball glass)

A shooter is generally recognized to be different from a shot.

A shot is a 1.5 oz of straight liquors, whereas a shooter is basically a very small mixed drink, 2-3 oz.

Ways to Serve a Drink

These are terms to describe how you make or serve a drink.

This is just insider jargon for mixing a drink. You start with ice, then build by adding other ingredients.

To create a drink or shot with visibly-separated layers of ingredients, you use a technique called floating or layering to put lighter alcohols on top of heavier ones.

You lay the heaviest layer down first, then float additional layers on top in one of two ways: by carefully pouring down the side of the glass or by pouring it over an inverted bar spoon (see above). This allows the alcohol to trickle over the bottom layer in many directions at once.

When someone orders their drink "neat," they want the liquor straight from the bottle, no mixer or ice. Neat drinks are room temperature.

There are several ways to mix the ingredients of a cocktail, and each has a different effect on the appearance and taste.

When a cocktail is shaken, ingredients are placed in a shaker tin and shaken up. Depending on the drink, you may pour the contents into a glass with or without straining. Ingredients with thick mixers (including dairy) require shaking.

It's possible to shake a drink too much. The cocktail can become bruised (cloudy in appearance) or simply diluted because the shaking melts the ice.

When a cocktail contains distilled spirits or light mixers, they're better off stirred (a self-explanatory process).

Some cocktails can't be shaken or stirred – they must be rolled. Rolling a drink means building the drink in one mixer and then slowly pouring it into another mixer. It's the most gentle mixing method.

Finally, frozen drinks are blended with ice in an electric blender.

Straight Up (or Up)

Both "straight up" and "up" refer to a drink that is shaken with ice then strained to prevent ice from becoming part of the final product.

In other words, they're asking for their drink to be chilled with a specific method.

"Straight up" is used for mixed drinks. If it's a simple liquor drink, they'll typically only use the word "up." For example, "whiskey up" is basically a chilled version of neat whiskey.

When "straight" is used by itself, it's typically a synonym for neat (see above).

A rinse is when you take a small amount of liquid, swirl it around to coat the inside of a glass, then dump out whatever doesn't stick.

Rinsing is often done with ingredients that have an extremely strong flavor or aroma, like liqueur or bitters. Adding a rinse can layer in that flavor without overwhelming the other ingredients.

Bartending can be fun and lucrative, but it's also a big responsibility. Many states hold bartenders legally liable for the actions of their patrons.

That's why some states, cities, or counties require or incentivize a bartending license. You earn your bartender's license by completing a class on local liquor law, also known as alcohol seller/server training. These courses teach you how to spot minors, judge whether someone is too intoxicated to be served, deescalate conflict, and more.

We're a state-approved provider of online seller/server training in many jurisdictions. You can learn what you need to know whenever and wherever you're comfortable. Get started today!