To help increase your knowledge of OSHA standards in Minnesota, we are going to dive into the difference between federal regulations and state plans, OSHA Minnesota training for entry-level and supervisory employees, fatal occupation statistics, and additional safety resources.

The federal Occupational Safety and Health Act (OSH Act) allows states to assume their own occupational safety and health responsibilities as long as they're "at least as effective" as the federal program.

Minnesota has an official state plan that covers all state and local government workers in Minnesota, as well as most private-sector workers. The state plan adopts most federal OSHA standards by reference, with a number of additional standards unique to Minnesota.

Differences between federal and state OSHA regulations include:

The Minnesota Occupational Safety and Health Administration (MNOSHA) is administered by the Minnesota Department of Labor and Industry (DLI). MNOSHA adopts and enforces the safety and health standards. That includes inspecting workplaces, issuing citations, and investigating worker complaints or accidents.

A small number of Minnesotans remain under federal OSHA jurisdiction, instead. Specifically:

Most federal standards apply in Minnesota, so training requirements are much the same no matter which agency your business reports to.

OSHA Minnesota requires training on specific safety standards that apply to your job functions. The only time jurisdiction might impact training are the standards where Minnesota adopted its own particular version.

Federal OSHA also has Outreach courses (sometimes referred to as "DOL cards") that cover common requirements for your industry. Even though OSHA doesn't require OSHA Outreach training, some employers might. In that case, you’ll either need an OSHA 10-Hour course for entry-level workers or an OSHA 30-Hour course for supervisors.

Not sure where to start? Read our guide. 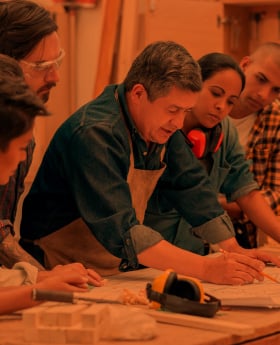 Although the main goal of OSHA safety training is to reduce workplace injuries, accidents, and fatalities, employees aren’t the only ones that will benefit from safety training. When employers invest in OSHA training programs they can avoid OSHA inspection penalties, lower workers’ compensation costs, and increase workplace productivity.

It’s easy for us to say that safety training helps keep workers safe, it’s another thing entirely to see the statistics from OSHA, the Department of Labor, and other Minnesota agencies. They prove that OSHA training plays a significant role in reducing workplace accidents.

The industries with the greatest number of fatalities were:

As you can see, Minnesota workers are at a high risk for injury and accidents. However, they’re not the only ones at risk for loss. Employers can also use OSHA training to reduce their risk of OSHA inspection enforcement penalties.

While the OSHA website lists the top enforcement cases on their website, here are the top cases for 2019 to give you a quick idea of the violations Minnesota employers faced.

Since Minnesota employers and workers are divided up into federal and state jurisdiction, there are separate local area offices for state and federal OSHA.

You need to contact the local area office for federal OSHA in Eu Claire if you're in a federal agency, the U.S. Postal Service or its private contractors, an offshore maritime employer, and certain Indian or agricultural operations.

All other private and public workplaces are under MNOSHA jurisdiction and are served by the MNOSHA office in St. Paul.

In addition to the information we have provided, you can visit Minnesota state agency websites for more information on safety resources.

Minnesota Department of Labor and Industry: The agency oversees a variety of programs that promote healthy workplaces, including construction codes and licensing, dual-training (PIPELINE Program), occupational safety and health, wage and hour standards, and workers' compensation.

While you now understand how crucial OSHA Minnesota training is to the safety and well-being of workers, you’re still not done yet! Your next task is to determine which OSHA training course you need.

Luckily, you don’t have to look far! With over 20 years of experience as an OSHA-authorized training provider, it’s easy to see why thousands of workers have selected us as their training provider. We offer OSHA 10-Hour Construction, OSHA 30-Hour Construction, OSHA 10-Hour General Industry, and OSHA 30-Hour General Industry to satisfy your OSHA training needs.

Simply select your appropriate course and sign up today!

Why learn with us

We’ve been trusted by millions of learners to provide their regulatory-approved training.

We're here for you with online chat and toll-free phone support.

You’re in good hands. We’ve been in business for over 20 years.